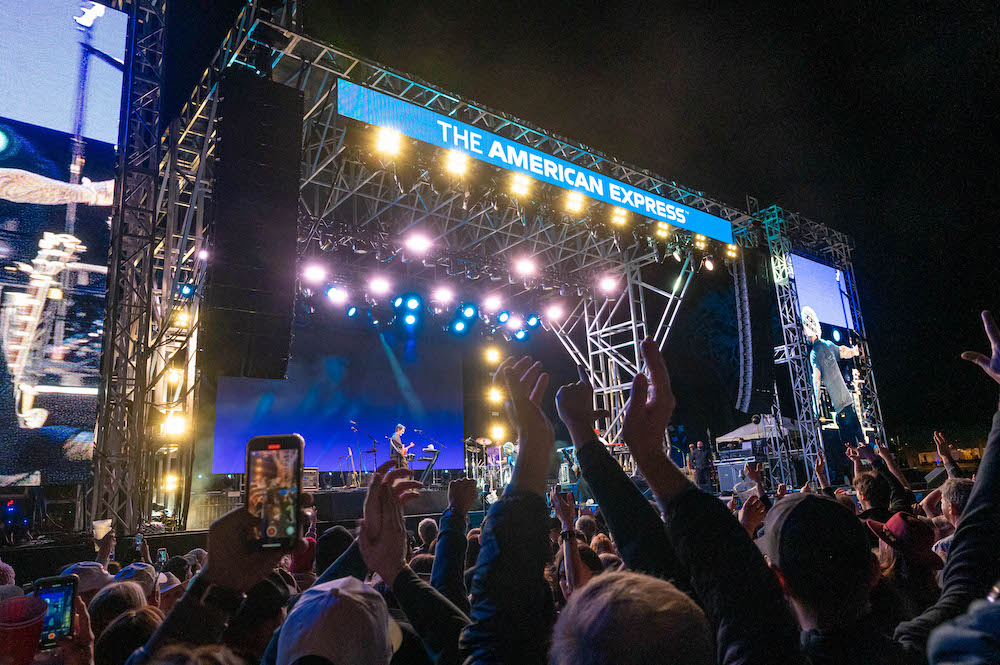 Stefani to perform Friday after second round of The American Express (PGA TOUR) on the PGA WEST Stadium Course driving range, and Rucker takes the stage Saturday after third round;

All daily ticket options are on sale now at www.theamexgolf.com

LA QUINTA, CALIF. – The American Express™ announced today that iconic Southern California native Gwen Stefani and three-time GRAMMY Award winning singer/songwriter Darius Rucker are the musical lineup for the 2023 Concert Series on the PGA WEST Stadium Course driving range during the Coachella Valley’s annual PGA TOUR golf tournament in January. Infusing competition with cause, the tournament also has a long history of supporting charities in the Coachella Valley and surrounding areas, contributing to the vibrance and sustainability of the local community.

Stefani, born and raised in Anaheim; a singer songwriter and charismatic frontwoman of No Doubt, will open The American Express’ Concert Series after the conclusion of second-round play on Friday, Jan. 20. Rucker, who first achieved musical prominence as the lead singer of Hootie & the Blowfish and has since become a hugely successful Country artist, will take the stage after the tournament’s third round on Saturday, Jan. 21.

“The Concert Series helps make this tournament one of the most highly anticipated stops on the TOUR,” said Pat McCabe, Executive Director of The American Express. “We’re looking forward to welcoming Gwen and Darius and continuing to grow the more than $63 million in total charitable funds that have been raised through this tournament to support local Coachella Valley-based charity organizations.”

Daily ticket options (for as low as $50) for The American Express are now on sale at the tournament’s website, www.theamexgolf.com. American Express Card Members receive a 20% discount for any online ticket orders.

The daily Champions Club ticket allows spectators to experience The American Express in the grandest fashion. Ticket holders receive a preferred parking pass and access to the Champions Club – a private, climate-controlled venue on the 18th green of PGA WEST’s Stadium Course which offers a hosted breakfast and lunch, snacks and a full bar all day – as well as all public fan venues at PGA WEST’s Stadium Course and the tournament grounds.

Champions Club tickets are $250 per day for Thursday’s first round (Jan. 19) and Sunday’s final round (Jan. 22), and $399 per day for Friday’s second round and Saturday’s third round. Champions Club ticket holders on Friday’s and Saturday’s concert days are welcomed access to an upgraded VIP viewing area near the stage with a complimentary full bar during each concert.

Daily grounds tickets (general admission to the grounds at PGA WEST and La Quinta Country Club and public fan venues at PGA WEST) for Thursday’s first round (Jan. 19) and Sunday’s final round (Jan. 22) are $50 each day. Grounds tickets for Friday’s second round and Saturday’s third round (includes admission to the post-round concert) are $79 each day.

On concert days (Jan. 21-22), daily Premium Pass and grounds ticket holders may purchase a VIP concert upgrade, providing access to the VIP concert viewing area near the stage and a complimentary full bar during each concert, for an additional $100.

A three-time GRAMMY® Award winner, Gwen Stefani has achieved global success as a songwriter, performer, charismatic frontwoman of No Doubt and as a multi-platinum solo artist. She has remained a trend-setting music and fashion icon with an impressive array of honors – four MTV Video Music Awards, two Billboard Awards, an American Music Award and a Brit Award.

To date, she has sold more than 60 million units worldwide, including her four-times platinum debut solo album Love. Angel. Music. Baby. – that delivered the hit singles “Rich Girl,” “What You Waiting For?” and the Pharrell Williams produced No. 1 hit “Hollaback Girl.”  Her sophomore album, The Sweet Escape, featured the Billboard Hot 100 top 10 single “Wind It Up” and the unforgettable anthem “The Sweet Escape.”  Her critically praised latest album, This Is What the Truth Feels Like, debuted at No. 1 on the Billboard Top 200 album chart and includes her powerful No. 1 single “Used To Love You.”  In 2020, Stefani had two No. 1 hits on Billboard’s Hot Country Songs chart with husband Blake Shelton, “Nobody But You” and “Happy Anywhere.”   Stefani also returns this September for her sixth season as a coach on the Emmy®-winning NBC series The Voice.

Stefani’s passion for makeup was integral in the 2022 launch of her beauty brand, GXVE (pronounced ‘give’). The clean, high-performance GXVE color cosmetics collection is inspired by Stefani’s iconic looks and created for the community of makeup lovers that find their inspiration, individuality and self-expression through artistry. Stefani is one of the first artists to merge music stardom into a series of global lifestyle brands like her fashion-forward clothing line, L.A.M.B., sister label Harajuku Lovers, and her eyewear line, gx, by Gwen Stefani.

Darius Rucker, a golf fanatic from Charleston, S.C., first achieved multi-Platinum status in the music industry as lead singer and rhythm guitarist of the GRAMMY® Award-winning band Hootie & the Blowfish, who have sold more than 25 million albums worldwide, including their Diamond-certified debut “Cracked Rear View,” which remains among the Top 10 best-selling studio albums of all time.

Since releasing his first Country album in 2008, Rucker has earned a whole new legion of fans with four No.1 albums on the Billboard Country chart, including RIAA Platinum-certified “Learn to Live” and “True Believers,” plus 10 No. 1 singles at Country radio and 11 Gold, Platinum or multi-Platinum certified hits.

Rucker, was inducted as a Grand Ole Opry member in 2012 and, in 2014, he won his third career GRAMMY® Award for Best Solo Country Performance with his nine-time Platinum version of Old Crow Medicine Show’s “Wagon Wheel,” one of the top five best-selling Country songs of all time. He co-hosted the 54th annual CMA Awards in 2020 and topped the charts at Country radio once again with “Beers and Sunshine” in 2021. New songs “My Masterpiece,” “Same Beer Different Problem” and “Ol’ Church Hymn” (feat. Chapel Hart) are available everywhere now as Rucker puts the finishing touches on a forthcoming album.

The American Express, featuring a record $8 million purse, is the first PGA TOUR regular season event in the continental U.S. each year and kicks off the TOUR’s West Coast swing. The tournament’s Concert Series returns for its sixth year (after debuting in 2017) and enhances the overall tournament week fan experience by packaging popular musical entertainment with great local food and many of the world’s best golfers to create a one-of-a-kind atmosphere for spectators. The event will be closed to the public from Jan. 16-18.

SPORTFIVE utilizes the unique emotional power of sports to create and enable pioneering partnerships in sports. By delivering responsible commercialization, full-service-solutions and long-term value for all stakeholders in sports, SPORTFIVE strategically and creatively connects brands, rightsholders, media platforms and fans by leveraging a global network paired with decades of experience and innovative spirit. As market leader and with customer centricity and vast data intelligence at its core, SPORTFIVE often leads the sports business into the future through its innovative digital solutions and thereby always aims to be the most progressive and respected partner in sports. SPORTFIVE operates as an international sports business and marketing agency with a global mindset and network of over 1,200 local experts based in 15 countries around the world, active in football, golf, esports, motorsport, handball, tennis, American football and many more. For more information, please visit SPORTFIVE’s website, content hub and social profiles.

ABOUT THE PGA TOUR

Fans can follow the PGA TOUR on PGATOUR.COM, the No. 1 site in golf, on the PGA TOUR app and on social media channels, including Facebook, Instagram (in English, Spanish and Korean), LinkedIn, Twitter, WeChat, Weibo, Toutiao, Douyin and LINE.